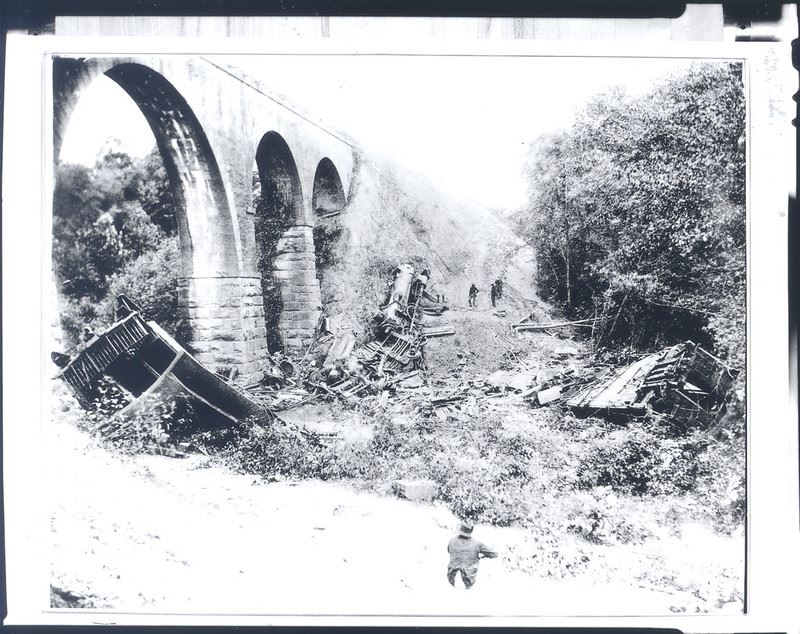 In the dark early morning hours of August 27, 1891, passenger train No. 9 of the Western North Carolina Railroad pulled into the sleeping town of Statesville. The train was due at 1:52 a.m. but was running 34 minutes behind schedule. It pulled into the depot at 2:26 a.m. and stopped only a minute to pick up 8 to 10 passengers before leaving. The train left heading toward stops in Newton and Asheville.  About five minutes had passed when the train approached the granite and brick 260-foot-long Bostian Bridge about two miles out of town traveling between 25 and 35 miles an hour.  As it crossed the bridge passengers felt an ominous jerking and bumping and then the awful sensation of falling downward as the train left the tracks and fell off the 60-foot-high bridge into Third Creek.

For several minutes after the crash there was dead silence with the only sound coming from the steam still escaping from wrecked engine No. 166. Then the moans and cries of the injured began to fill the darkness. All 52 passengers on board were injured and of those 22 were either killed during the accident or died a short time later.

The engine and tender came to rest on the bank on the west side of the creek. The first-class car was on top of the baggage and second-class cars. Part of the sleeper was in the water, while the other end of it was over the superintendent’s car, which was also partially submerged. Survivors of the wreck soon began to free themselves and climb the bank to seek help and warn other trains that might be following.

Newspapers across the state and even the country reported on the tragic accident and many eyewitness and survivor accounts were recorded in those pages.

Mrs. Sue E. Poole of Williamston and her daughter Miss Lou Allie Poole were trapped under the wreckage in the creek which had been swollen from several days of rain. The water began rising as the wrecked cars formed a dam on the creek. The daughter held her mother’s head out of the water as long as she was able before being forced to let her go and watch her drown. George W. Sanderlin lay trapped in the wreckage almost within reach of Mrs. Poole and heard her last expiring gasp as she drowned. A few passengers made their way into town and began ringing the bell in the courthouse yard sounding the alarm.

Soon the entire town of Statesville was headed out of town on horseback, buggy, wagon, and on foot carrying lanterns. The horrible scene that greeted them was one that most would never forget. Rescuers quickly went to work with axes cutting through the wooded cars and pulling the victims out. Survivors would later describe the efforts of the citizens of Statesville as heroic. “It was a long time before relief came to us, but when the disaster became known no people could have worked more nobly than the people living in the neighborhood of the wreck and also the people of Statesville near by,” was a reported quote of George W. Sanderlin.

The dead pulled from the wreckage were laid on the bank in a depression south of the bridge and the wounded were treated by town doctors and made as comfortable as possible before being moved away. The Landmark reported, “The memory of the day’s scenes and events will haunt the people of Statesville and visitors here as long as they live. Vehicle after vehicle came in from the wreck, some with one, some with two of its victims.” The dead were taken to the Farmer’s Tobacco Warehouse (also known as the Farmer’s Warehouse at the southwestern corner of Meeting and Walnut Streets) and the bodies tagged. The injured were housed with families near the accident and the St. Charles Hotel, Hotel Iredell, and the Cooper House.

B.W. Bowly, a traveling salesman from Atlanta, Georgia, said, “During our stay in Statesville, the great heart of the people of Iredell County was much in evidence. They were more than generous, and a living example of adage: ‘One touch of pity makes the whole world kin.” The railroad brought a carload of convicts from Newton in and a temporary track was laid down on the bridge. By 5 o’clock that evening regular trains were once again passing over the Bostian Bridge and the wreckage below.

A formal coroner’s jury ruled that the passengers, “Came to their death by the wrecking of the train on the Western North Carolina Railroad at Bostian’s Bridge, over Third Creek, in Iredell County, North Carolina on Thursday morning, August 27, 1891, the said wrecking of the train caused by a loose rail, the bolts and spikes of the same having been taken out by some person or persons unknown to the jury, with tools or implements belonging to said railroad company, which said tools or implements were by gross negligence on the part of said railroad company, left in an open shed accessible to every passer-by. We do also find that several of the cross-ties at and near the break in the railroad track where said rail was displaced were unsound and should have been replaced, and that the superstructure on the bridge was part defective and unsafe and further that the high rate of speed maintained in running trains over the bridge deserves and has censure and condemnation of the jury.”

Over the following years, several lawsuits were reported against the railroad company by survivors and relatives of the deceased for negligence.

The five black and white photos hanging on the wall in the Iredell County Local History Department were made by William Jasper Stimson, a photographer from Statesville, who visited the wreck and took the only known photographs of the event. Stimson took his camera to the scene by wagon and then had to return to town after he took each photo to develop the image. William Nan Ness of Charlotte made some drawings based on those photographs for Frank Leslie’s Weekly published in 1891. 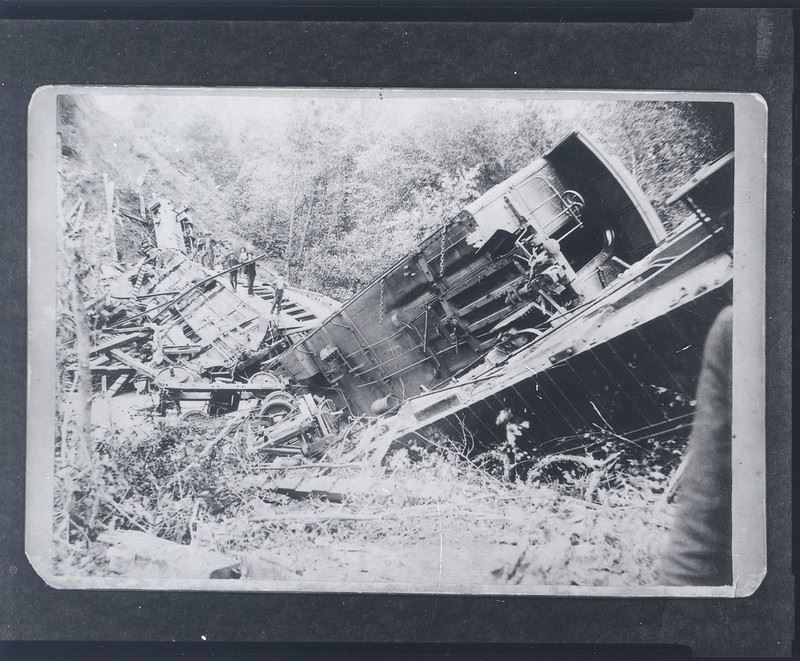 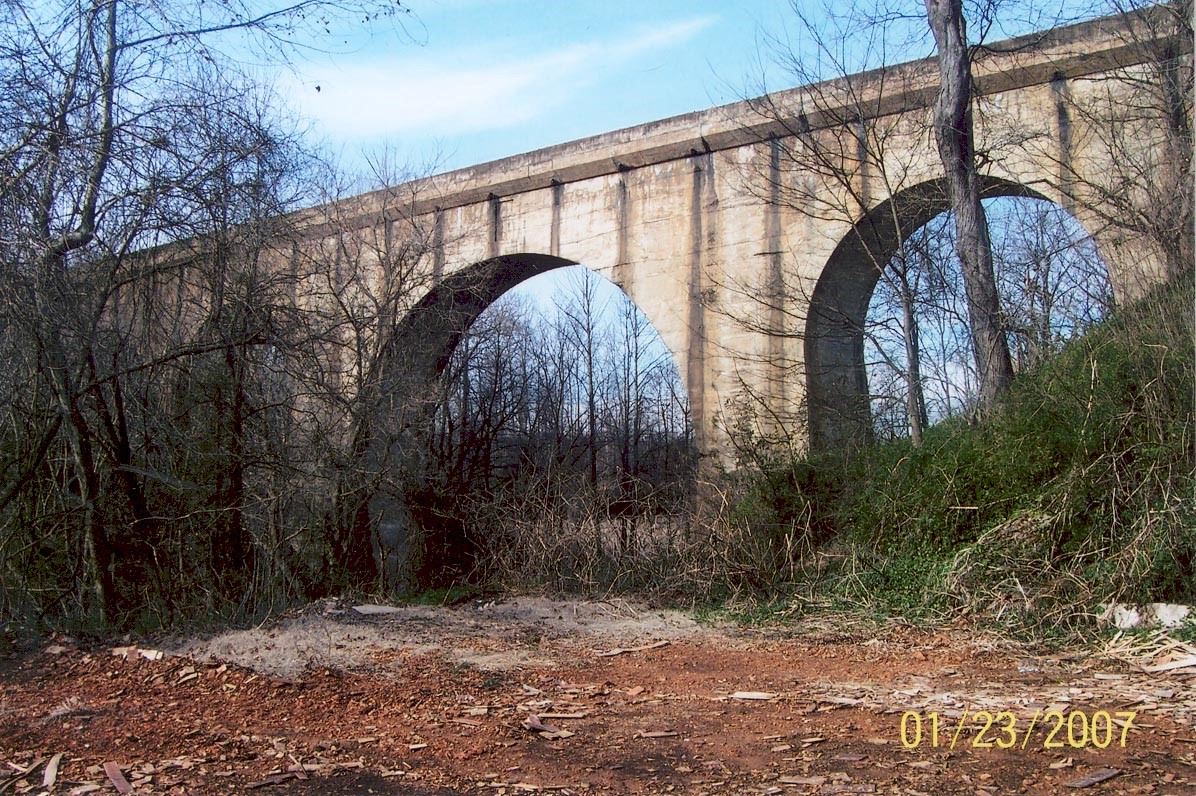 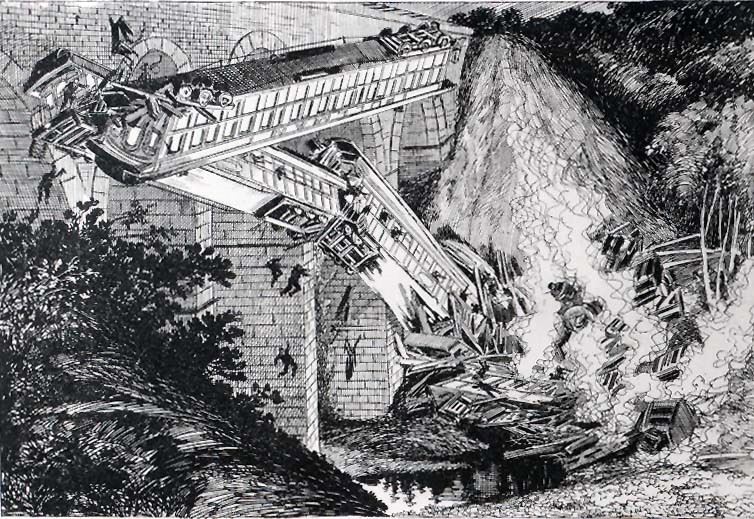