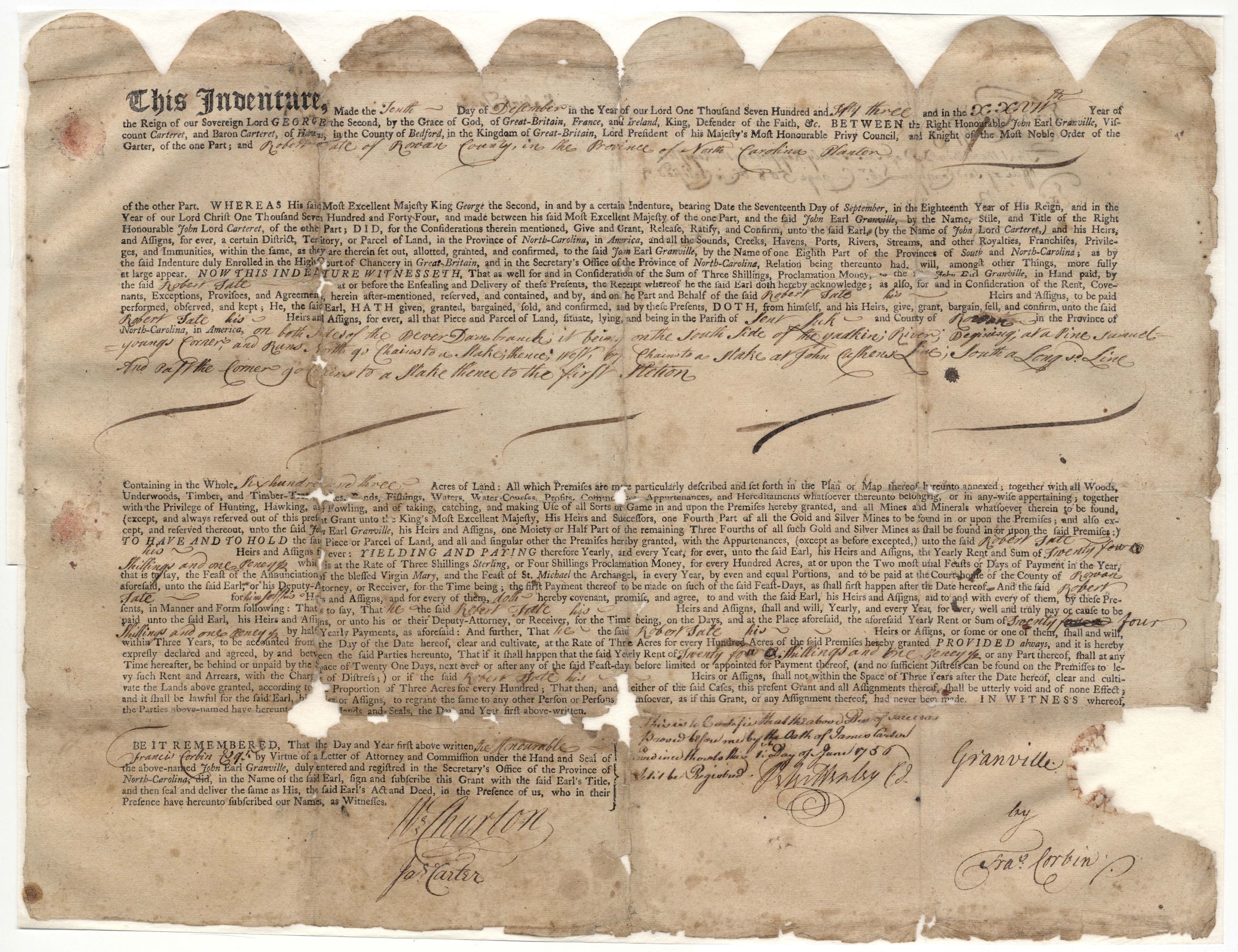 The Land Grant history of North Carolina is divided into different eras. The first era was the Provincial or Proprietary Era from 1663-1729. In 1663 King Charles II of England took the throne and granted land in the Carolinas to eight men who had helped him regain his throne. These men were called the Lord Proprietors of Carolina, and they had the right to grant land to others. The boundaries of the land they received extended from the present-day N.C. and Virginia border on the north to a line drawn across present-day Florida on the south. During the time they owned this land N.C. was a proprietary colony. The land was distributed in two ways: direct purchasing of land and through the headright system. They gave land grants from 1663-1729 when 7 of them gave the land back to the British Crown. The exception was John, Earl of Granville who issued land from 1744 to 1764. The other land given back and not held by Granville was granted by the British Crown from 1725-1775. The area of land belonging to Lord Granville became known as the Granville District. Charles II died in 1685, Forty-two years later, in 1727, George the II was crowned King of England. The Lords Proprietors, with the exception of the Earl of Granville, returned their rights to the land given to them by Charles II, effectively ending the grants from the Lords Proprietors in 1729.

“This Indenture, Made the Tenth Day of December in the Year of our Lord One Thousand Seven Hundred and Fifty three and in the XXVIIth Year of the Reign of our Sovereign Lord GEORGE the Second, by the Grace of God, of Great-Britain, France, and Ireland, King, Defender of the Faith, &c. BETWEEN the Right Honourable John Earl Granville, Viscount Carteret, and Baron Carteret, of Hawnes, in the County of Bedford, in the Kingdom of Great-Britain,  Lord President of his Majesty’s Most Honourable Privy Council and Knight of the Most Noble Order of the Garter, of the one Part; and Robert Tate of Rowan County, in the Province of North Carolina Planten of the other Part.  WHEREAS His said Most Excellent Majesty King George the Second, in and by a certain Indenture, bearing Date the Seventeenth Day of September, in the Eighteenth Year of His Reign, and in the Year of our Lord Christ One Thousand Seven Hundred and Forty-Four, and made between his said Most Excellent Majesty of the one Part, and the said John Earl Granville, by the Name, Stile, and Title of the Right Honourable John Lord Carteret, of the other Part; D I D, for the Considerations therein mentioned, Give and Grant, Release, Ratify, and Confirm, unto the said Earl, (by the Name of John Lord Carteret,) and his Heirs, and Assigns, for ever, a certain District, Territory, or Parcel of Land, in the Province of North-Carolina, in America, and all the Sounds, Creeks, Havens, Ports, Rivers, Streams, and other Royalties, Franchises, Privileges, and Immunities, within the same, as they are therein set out, allotted, granted, and confirmed, to the said John Earl Granville, by the Name of one Eighth Part of the Provinces of South and North-Carolina; as by the said Indenture duly Enrolled in  the High Court of Chancery in Great-Britain, and in the Secretary’s Office of the Province of North-Carolina, Relation being thereunto had, will, amongst other Things, more fully at large appear.  NOW THIS INDENTURE WITNESSETH, That as well for and in Consideration of the Sum of Three Shillings, Proclamation Money, the said John Earl Granville, in Hand paid, by the said Robert Tate at or before the Ensealing and Delivery of these   Presents, the Receipt whereof  he the said Earl doth hereby acknowledge; as also, for and in Consideration of the Rent, Covenants, Exceptions, Provisos, and Agreements, herein after-mentioned, reserved, and contained, and by, and on the Part and Behalf of the said Robert Tate his Heirs and Assigns, to be paid performed, observed, and kept, He the said Earl HATH given, granted, bargained, fold, and confirmed, and by these presents, DOTH, from himself, and his Heirs, give, grant, bargain, sell, and confirm, unto the said Robert Tate his Heirs and Assigns, for ever, all that Piece and Parcel of Land, situate, lying, and being in the Parish of St. Luke and County of Rowan in the Province of North-Carolina,  in America, on both sides of the Bever Dam branch; it being on the South side of the Yadkin River Beginning at a Pine Samuel Youngs Corner and Runs North go Chains to a Stake; thence well by chains to a stake at John Cushens Line; thence South a Long to Line and Past the corner go chains to a stake thence to the first station.

Containing in the Whole, Six hundred and three Acres of Land; All which premises are more particularly described and set forth in the Plan or Map thereof hereunto annexed; together with all Woods, Underwoods, Timber, and Timber-Trees, Lakes, Ponds, Fishings, Waters, Water-Courses, Profits, Commodities, Appurtenances, and Hereditaments  whatsoever thereunto belonging, or in any-wife appertaining; together with the Privilege of Hunting, Hawking, and Fowling, and of taking , catching, and making Use of all Sorts or Game in and upon the Premises hereby granted, and all Mines and Minerals whatsoever therein to be found, (except, and always reserved out of this present Grant unto the King’s Most Excellent Majesty, His Heirs and Successors, on Fourth Part of all the Gold and Silver Mines to be found in or upon the Premises; and also except, and reserves thereout, unto the said John Earl Granville, his Heirs and Assigns, one Moiety or Half Part of the remaining Three Fourths of all such Gold and Silver Mines as shall be found in or upon the said Premises:)  TO HAVE AND TO HOLD the said Piece or Parcel of Land, and all and singular other the Premises hereby granted, with the Appurtenances, (except as before excepted,) unto the said Robert Tate his Heirs and Assigns forever: YIELDING AND PAYING therefore yearly, and every Year, for ever, unto the said Earl, his Heirs and Assigns, the Yearly Rent and Sum of Twenty four Shillings and one peney ½ which is at the Rate of Three Shillings Sterling, or Four Shillings Proclamation Money, for every Hundred Acres, at or upon the Two most Usual Feasts or Days of Payment in the Year, that is to say, the Feast of the Annunciation of the blessed Virgin Mary and the Feast of St. Michael the Archangel, in every Year, by even and equal Portions, and to be paid at the Court home of the County of Rowan aforesaid, unto the said Earl, or his Deputy-Attorney, or Receiver, for the Time being; the first Payment thereof to be made on such of the said Feast-Days, as shall first happen after the Date hereof.  And the said Robert Tate for himself, his Heirs and Assigns, and for every of them, doth hereby covenant, promise, and agree, to and with the said Earl, his Heirs and Assigns and to and with every of them, by these Presents, in Manner and Form following: That is to say, that he the said Robert Tate his Heirs and Assigns, shall and will, Yearly, and every Year, for ever, well and truly pay or cause to be paid unto the said Earl, his Heirs and Assigns, or unto his or their Deputy-Attorney, or Receiver, for the  Time being, on the Days, and at the Place aforesaid, the aforesaid Yearly Rent or Sum of Twenty four Shillings and one peney ½ by half Yearly Payments, as aforesaid: And further.  That he the said Robert Tate his Heirs or Assigns, or some or one of them, shall and will within three years, to be accounted from  the Day of the Date hereof, clear and cultivate, at the Rate of Three Acres for every Hundred Acres of the said Premises hereby granted PROVIDED  always, and it is hereby expressly declared and agreed, by and between the said Parties hereunto, That if it shall happen that the said Yearly Rent of Twenty four Shillings and one peney ½ or any Part thereof, shall at any Time hereafter,  be behind or unpaid by the Space of Twenty One Days, next over or after any of the said Feast-day, before limited or appointed for Payment thereof, (and no sufficient Distress can be found on the Premises to levy such Rent and Arrears, with the Charges of Distress;) or if the said Robert Tate his Heirs or Assigns, shall not within the Space of Three Years after the Date hereof, clear and cultivate the Lands above granted, according to Proportion of Three Acres for every Hundred; That then, and either of the said cases, this present Grant and all Assignments thereof, shall be utterly void and of none effect; and it shall be lawful  for the said Earl his Heirs or Assigns, to regrant the same to any other Person or Persons whomsoever, as if their Grant, or any assignment thereof had never been made, IN WITNESS whereof, the Parties above-names have hereunto set their Hands and Seals, the Day and Year first above-written.”BE IT REMEMBERED, That the Day and Year first above written, the Honourable Francis Corbin, Esq., by Virtue of a Letter of Attorney and Commission under the Hand and Seal of the above-named John Earl Granville, duly entered and regifted in the Secretary’s Office of the Province of North-Carolina, did, in the Name of the said Earl, sign and Subscribe this Grant with the Said Earl’s Title, and then seal and deliver the same as His, the said Earl’s Act and Deed, in the Presence of us, who in their Presence have hereunto subscribed our Names, as Witnesses.”

This is to Certify that the above deal of “Robert Tate” proved before me by the Oath of James Carter.  Evidence thereto this 1: Day of June 1756 let it be Registered