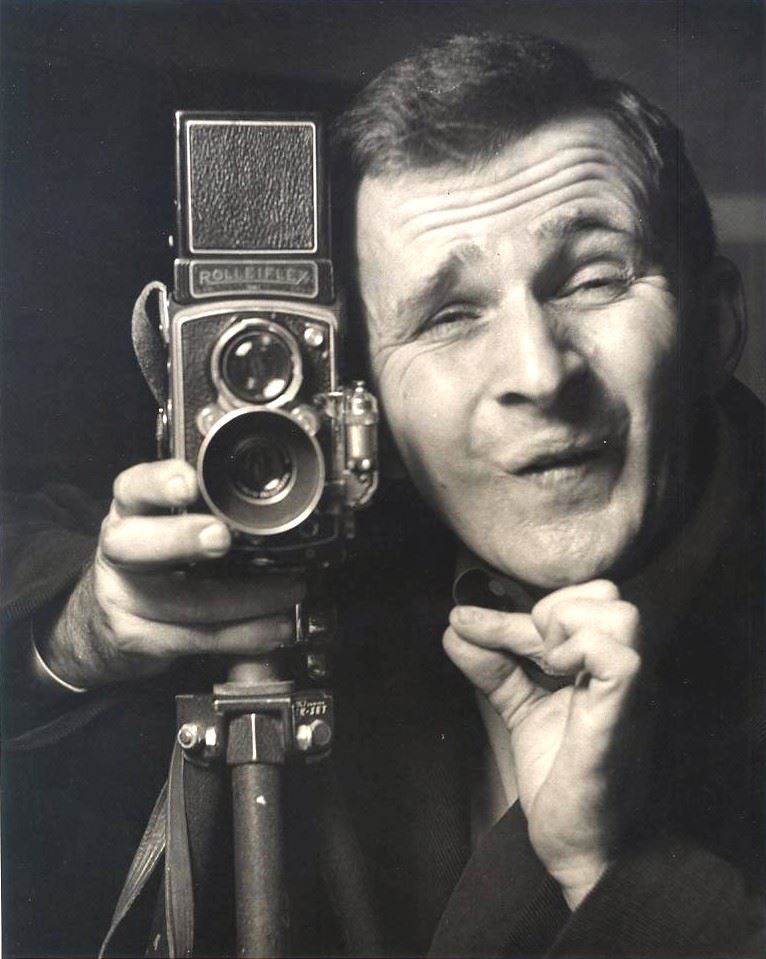 Max Bailey Tharpe was the second son of James Edward Tharpe Sr. and Jamie Bailey Tharpe of 420 West Front Street in Statesville. Max graduated from Mitchell Community College in 1940 and then enlisted in the U.S. Army Air Corps serving for 40 months. After leaving the military Max studied photography at the Art Institute of Chicago completing his studies in February of 1947. Returning to his hometown of Statesville, Max began a life-long career as both a newspaper and commercial photographer.  He worked as the photographer for the Statesville Landmark and later the Statesville Record and Landmark newspapers while selling his photographs to magazines around the country.

Max Tharpe and the German Rolleiflex camera on which he took most of his photos became well known around Statesville. Max preferred to work as a freelance because, “I didn’t like being told what to do.” People in Statesville remember him as never being without his camera. His most popular photo was of 10-year old Ray Anderson of Wilkes County eating an apple. Entitled “Juicy-fruit Smile,” the photograph was used by the National Apple Institute on billboards and in publications around the country.

Max became known nationwide for his cover portraits of teenagers and children. Pointing to his filing cabinet of photos and his darkroom Max once said, “This is the part of photography that I don’t like. I like to get out and meet people and take pictures of them.” Many of Max’s photos were used in religious publications and Max said later in life that “I just always wanted to please God with my photos and my life. That’s always been my motto, and that’s what I tried to do.” Max’s own personal favorite photo was of Brenda James, a high school student, with Bill Graham in the background. Max said, “She looks as if there is not a camera within a mile." The photo was taken in 1958.

When the Eastman Kodak Company planned a 300-picture exhibit at the White House Youth Conference twenty-one of the photographs used were by Max Tharpe. In 1952 Max was named North Carolina Photographer of the Year. He also won the Freedoms Foundation Award and the Southern Photographer of the Year award. His work appeared often in the State Magazine including several covers. Other publications included Chevrolet Magazine, North Carolina Education, Parade, Popular Mechanics, PTA Magazine, and Friend’s Magazine.

Max retired in the late 1960s to take care of his ailing mother and together they relocated to Ft. Lauderdale, Florida where he became the resident photographer at Coral Ridge Presbyterian Church which he attended. In August of 2007 Max donated his photograph collection to Mitchell Community College. A Max Tharpe Photograph Exhibit was held at the Iredell Museums in Statesville running from Nov. 14, 2008 through Feb. 28, 2009. Eighty-eight-year-old Max Tharpe attended the opening of the exhibit and said of his photos, “I remember all of them, every one.” In 2010 many of the original negatives to Max Tharpe’s photos were found in his mother’s old home by its new owner. The owner donated them to the Iredell County Public Library in hopes that that could be preserved. Upon his death at age 90 Max was brought back home and buried with military honors in 2010 at the Holly Springs Baptist Church in Harmony.

The library made over 40,000 photograph images of the Stimson Collection available online in March of 2013. In February 2014, an additional 30,000 images from the Max Tharpe Collection was uploaded for public viewing. The collection can be viewed online at Flickr.