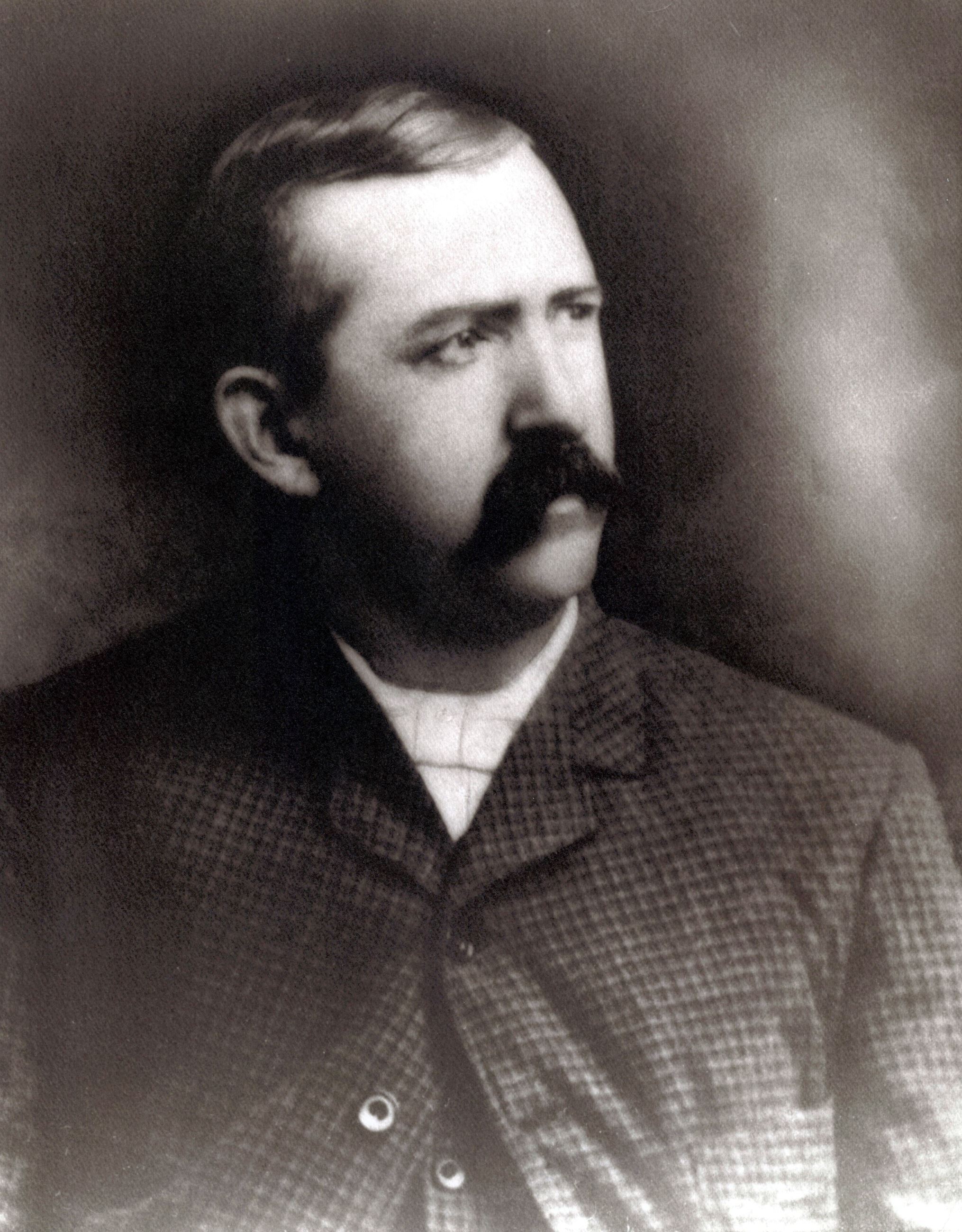 Joseph Pearson Caldwell was born in Statesville on June 16, 1853 to Joseph Pearson Caldwell and Amanda McCulloch. Their son was called “J.P.” rather than junior. Joseph P. Caldwell Sr. was an attorney, State Senator, and U.S. Congressman. Joseph Sr. dies on June 30, 1853 two weeks after J.P.’s birth. Unlike his father, J.P. lacked a formal education and much of his teaching comes from his older sister, Jane Amanda “Jennie” Caldwell.

In 1872, J.P. was hired away from Drake by Charles R. Jones who had started a rival paper called the Statesville Intelligencer. It was at the Intelligencer that he first began writing local news stories. In January of 1874, Jones discontinues the Intelligencer and purchases the old Charlotte Observer.

On March 8, 1909, Caldwell suffered a stroke of paralysis and was later sent at his request to the State Hospital in Morganton. A strong supporter of medical care for the mentally ill, Caldwell had served for a time as the facility's director. He remained there as a guest patient until his death on November 22, 1911. He is buried in the Oakwood Cemetery in his hometown of Statesville.

On June 19, 1874, attorney John B. Hussey’s publishes the first issue of The Landmark. In 1877, Hussey’s sells The Landmark to J.S. Ramsey who later sells the paper to J.P. Caldwell who is by now an experienced newspaper man having worked as a printer, writer, and editor. Over the next 12 years, Caldwell turns The Landmark into what many considered to be the finest newspaper in North Carolina.

The first issue of The Landmark under J.P. Caldwell lists him as, “JOS P. CALDWELL, Editor and Proprietor” and is published on Jan. 9, 1880. In his first editorial Caldwell promises his readers that “Politics aside, I shall seek to make The LANDMARK a journal of interest to every class of subscribers. It will always have an eye to the material welfare of Statesville, Iredell and all the counties composing what is known as the Northwestern corner.”

On Aug. 27, 1891, a passenger train of the Western North Carolina Railroad derails and falls off the Bostian Bridge into Third Creek two miles west of Statesville at around 2:30 in the morning. Twenty-two people are killed in the accident. At daylight J.P. Caldwell goes by horse and buggy to cover the most important local news story in Iredell County history. Caldwell’s articles on the train wreck are an early example of first-person journalism and editors across the state praised Caldwell’s reporting. Iredell County historian Homer Keever devoted a column to Caldwell’s coverage of the accident on August 25, 1966, titled, “Editor J.P. Caldwell’s Story Of Bostian Bridge Wreck In 1891 Is Considered a Classic.”

The desk J.P. Caldwell worked at in The Landmark newspaper office from 1880-1892 can be seen in the photograph below. In 1954 The Landmark was purchased by the Statesville Record and the two newspapers were combined to become today's Statesville Record and Landmark.  J.P. Caldwell’s desk remained a fixture in the paper’s office until May 10, 2022 when the desk along with other historical items from the newspaper were loaned to the Iredell County Public Library for permanent display in the Local History & Genealogy Department.

Caldwell is also memorialized in state highway markers from the North Carolina Division of Archives and History both in Statesville (below right photo) and in Charlotte (below left photo). The one in Statesville is located on West Front Street at the S. Mulberry Street intersection and was erected in 1975. The one in Charlotte was erected in 1949 and is located on S. Tryon Street at the Stonestreet intersection.

J.P. Caldwell lacks a formal education, but he is keenly aware of the world around him and through on the job experience he evolves as a journalist and in doing so changes the newspaper industry in North Carolina. Over the next 17 years as editor J.P. Caldwell makes the Charlotte Observer the dominant newspaper in the state and one of the most important newspapers in the South.

Earlier in his career J.P. had opposed the graded school system in North Carolina due to concerns over the tax burden it would bring, but later he changes his position and becomes a supporter of free public education. J.P.’s editorials in the Charlotte Observer established him as a leading voice in state politics as he writes in support of manufacturing, public schools, and medical care for the mentally ill.

On Jan. 9, 1880, Caldwell had promised The Landmark readers that, “First and foremost its readers will never have cause to question it’s loyalty to the conservative Democratic Party.” Caldwell had continued his support of the Democratic Party in North Carolina after taking over the Charlotte Observer until 1900 when he broke with party leaders by refusing to endorse William Jennings Bryan for President making the Observer an independent newspaper. By establishing the Charlotte Observer an independent newspaper, Caldwell makes the paper into what is now referred to as a “newspaper of record.” The Charlotte Observer became a paper with a large circulation whose editorials and news stories were independent, authoritative, and accurate. 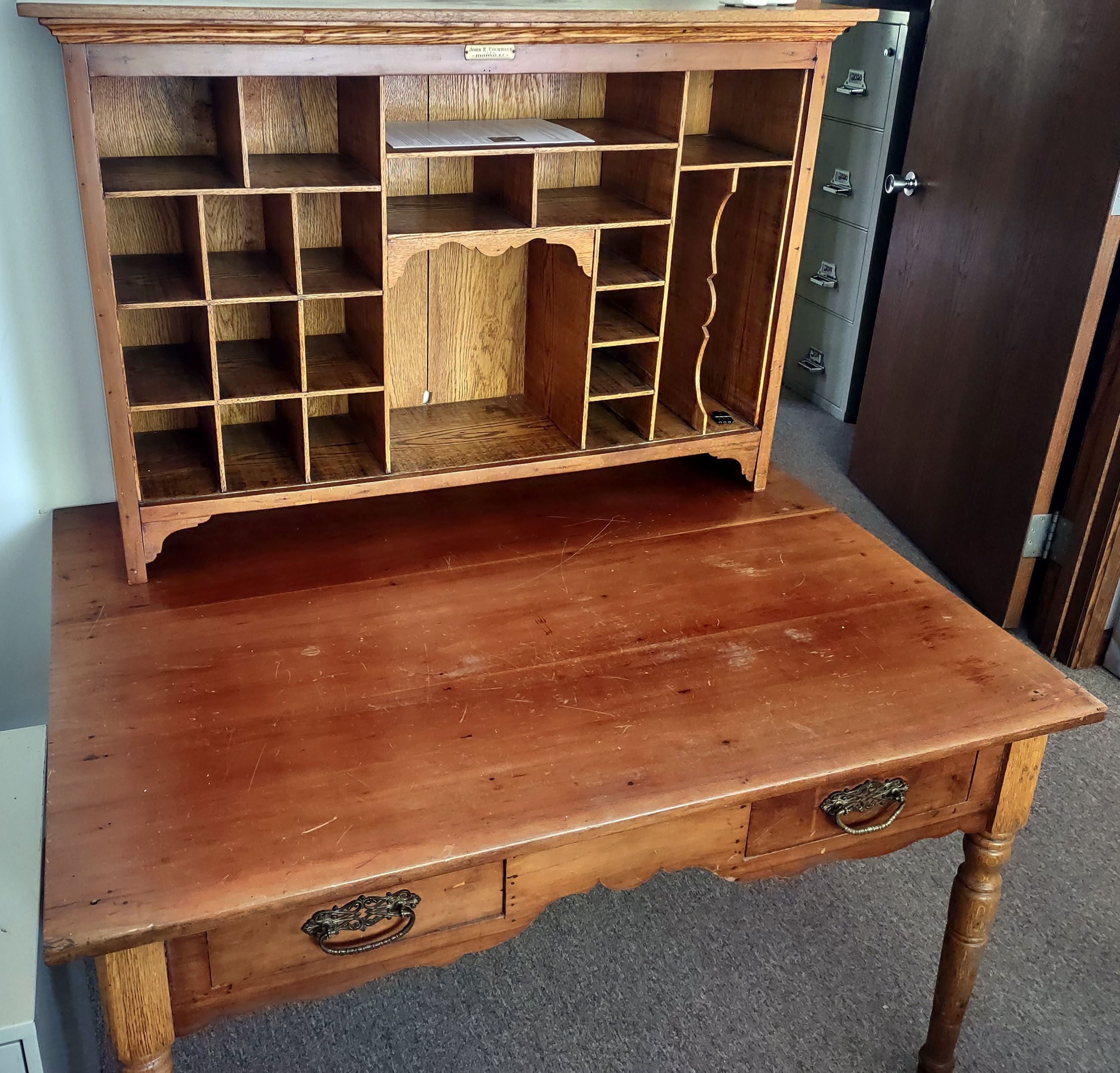 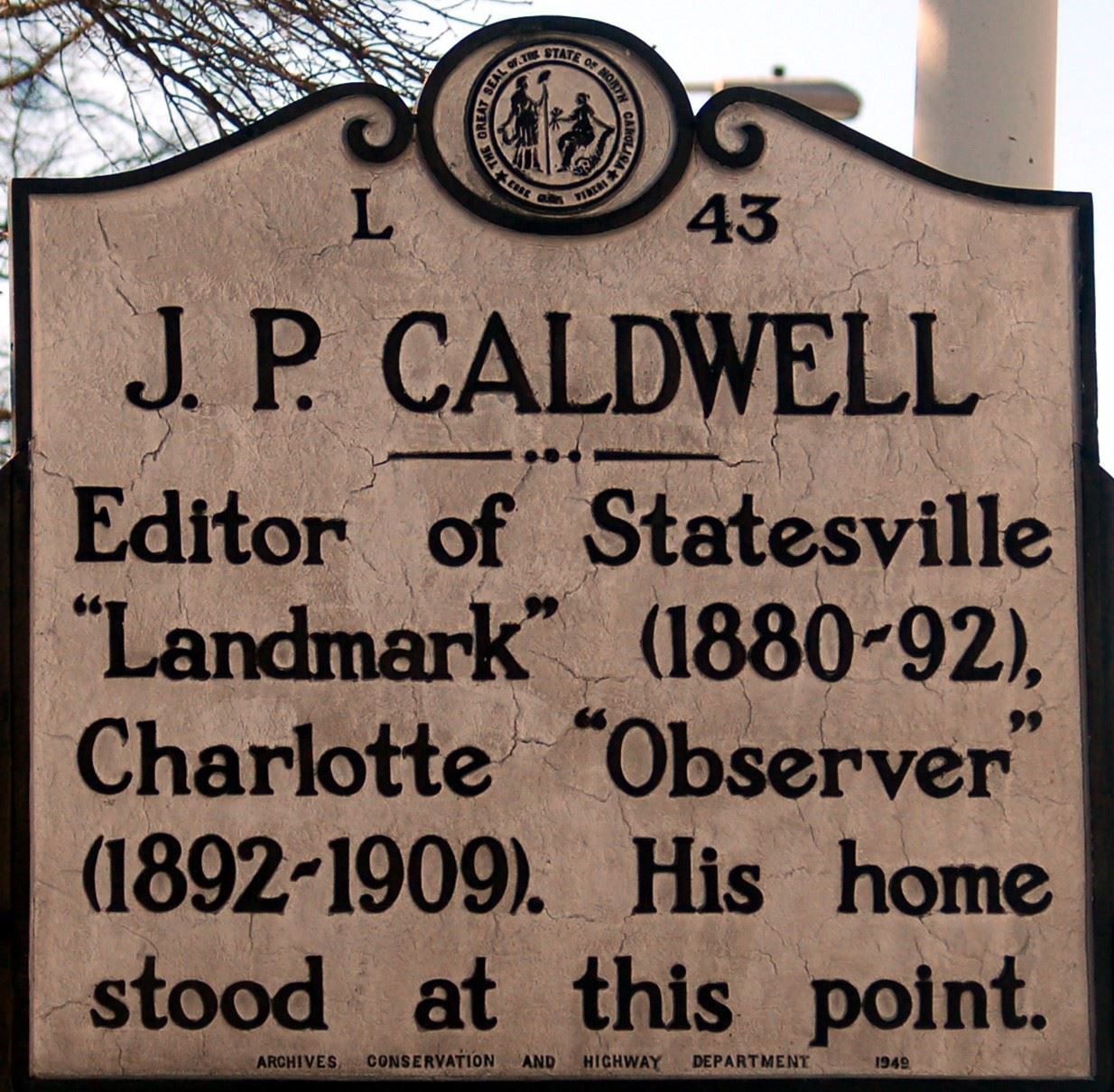 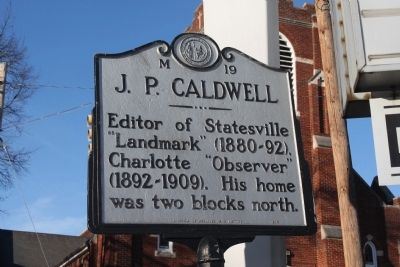