Frans Van Bergen was born in Maastricht, Holland on Oct. 11, 1913 to Fransiscus Maria and Elizabeth Glaudemanes Van Bergen. He was descended from a long line of artists known for their work in creating family coats-of-arms. Van Bergen studied for six years at the Jan van Eyck Art Academy of Maastricht, Holland where he met his future wife, Gertrude, also an artist studying at the Academy. Van Bergen devoted his time to oils, water colors, charcoal sketches and drawings, along with work in stained glass and mosaic creations.

After completing his studies at Maastricht, Van Bergen studied with some of Holland’s foremost artists in the 1930s. He continued to work as a commercial artist in Maastricht until the war forced him underground when German troops occupied the Low Countries during World War II. After the war he worked as a commercial artist in Belgium and Germany and did commercial designing at world fairs in Brussels, Frankfurt, Utrecht and Amsterdam while his wife taught at the Maria Montessori School in Maastricht.

In November 1956, Frans Van Bergen and his wife moved to Atlanta. Van Bergen explained the move by saying, “Our own country is much too small. Here we felt that our business could grow.” While in Atlanta, Van Bergen presented a one-man show at Atlanta’s High Museum and was awarded second place in the Fine Arts Festival at Marietta, Ga. He was a member of the Atlanta Art Association and soon became well known in artistic circles.

He came to Statesville in 1958 to work as the artist for the Laws Stained Glass Studio on Turnersburg Road across from Ebenezer School. C.A. Laws and his wife started the Laws Stained Glass Studio after Laws was discharged from the Army in 1946. Van Bergen served as the company’s artist in the making of stained glass for churches. The Van Bergen family moved into a house on Kelly Street in Statesville and soon began teaching art lessons to adults in the home on Tuesday and Thursday evenings. Van Bergen’s reputation as an artist spread throughout the community and he became the first curator for the newly formed Statesville Arts and Science Museum, now known as Iredell Museums. Van Bergen remained the curator of the museum for the next fifteen years before retiring on May 31, 1974.

In addition to his work in glass for the Laws Stained Glass Studios, Van Bergen did oil paintings, specializing in portraits. He and his wife were very popular among Iredell County’s art enthusiasts though he found that people in the United States overall were much less art-conscious than they were in Europe. “Over there,” he said, “it seems that everyone has some form of art in his home. But over here you must first sell the idea and then decide what the art is going to be.”  He said that in Europe, “every architect has a very close friend who is an artist,” and he pointed out that the artists are called on in the planning of many new homes and buildings.

While in Statesville, Van Bergen repaired church stained glass, painted, ran the museum, and taught art classes. He completed his first mural assignment at the T.G. Shelton home in Statesville. Van Bergen had a strong interest in ecclesiastical art often exhibited by the numerous religious creations he put in virtually every area of his artistic work. Among his early works was a stained glass window at the Arts and Science Museum depicting symbols of the arts and sciences in brilliant color and intricate design around the museum’s motto, “To promote an interest in and enthusiasm for the arts and sciences.” The six by four foot window was installed in the fanlight over the door.

Other Van Bergen creations include stained glass windows at St. Pius X Catholic Church in Statesville, the mural in the Mitchell Community College Library, and murals for the City Hall council room, and for Davis Hospital.

Van Bergen’s father made wood carvings and specialized in coats of arms. For the Bicentennial celebration in Iredell County, Frans Van Bergen painted the Iredell family coat of arms which now hangs in the Local History Room at the Iredell County Public Library.

Van Bergen created the Rip Van Winkle inspired mural, which now hangs on display in the Iredell County Public Library. The mural first hung in the Arts and Science Museum workshop in 1962. It was also displayed in the bar area of the newly opened Statesville City Club in the Vance Hotel. Later, the City Club was moved to the Ramada Inn and then to the Stimpson-Wagner Building. The mural was carefully moved each time by Gene Troutman, Jr. who believed in the revitalization of Statesville’s downtown. The mural now hangs on display on the main floor of the Iredell County Public Library where it was dedicated in Gene’s memory by the James A. Jennings family, April 2, 2006.

His employer C.A. Laws once said, “An artist puts into a picture what a preacher puts into words.” There is no doubt that Van Bergen left behind an artistic legacy in Iredell County. More information can be found about Frans Van Bergen and his work on his studio's website. The site also features the locations of other artwork pieces that are displayed throughout Iredell County. 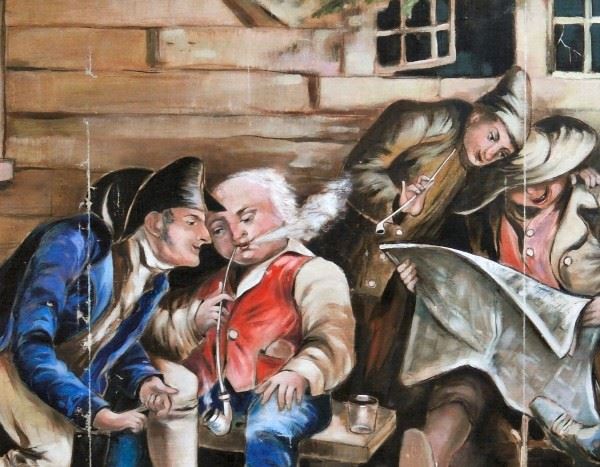 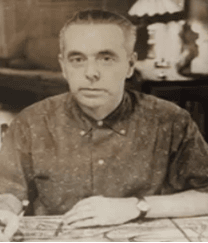 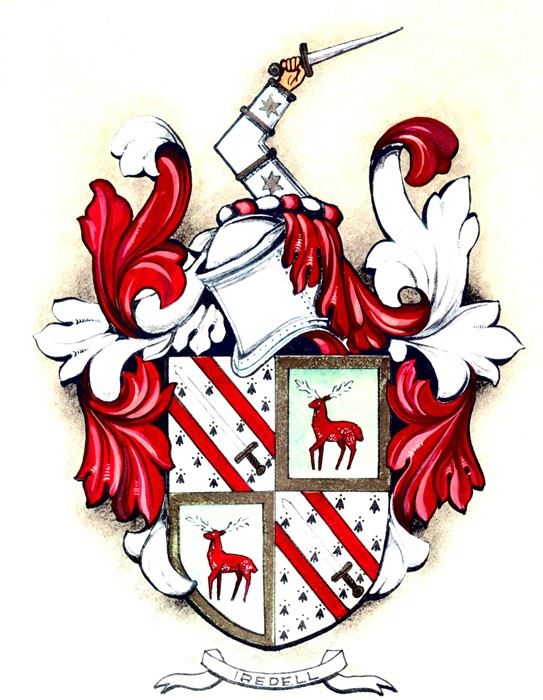